Two pronounced capabilities show up in the most successful entrepreneurs and organizational leaders I encounter:

This is the second of a two-part blog series exploring these essential skills and offers key practices to enhance your ability to adapt and be resilient, based on the model for change and goal achievement shown below: 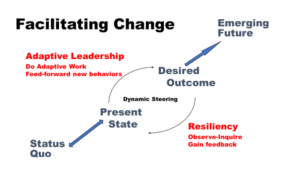 If doing adaptive work merely sounds like “keeping your nose to the grindstone,” that is not it. When we take an action and do not get an immediate positive response, the typical response is to do more of the same louder, harder, and faster. The result is often an overcorrection.

The capacity for adaptation and resilience actually makes life much easier, enabling you to work smarter not harder.

When teaching leadership in Japan, one of my course participants was the coach the Japanese Olympic White Water Rafting Team. That sporting event is dominated by enormous athletes from European countries. The relatively diminutive size of the Japanese people made their team the laughable equivalent of the Jamaican Bobsled Team. It just didn’t make sense.

The first year competing, out of 17 teams in the field, the Japanese team placed 17th. The coach, realizing that they would not be contenders on the basis of physical strength, noticed an important nuance in the winning team. When one of the strong paddlers took a stroke in the water, it was so overpowered that the three other team members would have to recover and make course correction. The Japanese coach knew that if his team could use their greatest strengths—communication and collaboration, instead of overcorrection and compensation—they had a chance to be competitive.

The next year, the Japanese team ranked first in the world with the Olympic gold medal. A marvelous example of adaptation and resiliency!

When you take an action toward achieving your goal, look around to see if you made progress. If your actions moved you toward your desired outcome, excellent. Do more of that.

If your actions did not make any noticeable progress, why not? Discover what is not working and do something different.

When you can sense what is happening and respond effectively, the cycle of adaption and resilience gives you the added capability to dynamically steer your business toward success. The more rapid the feedback the better able you are to respond with small corrections. 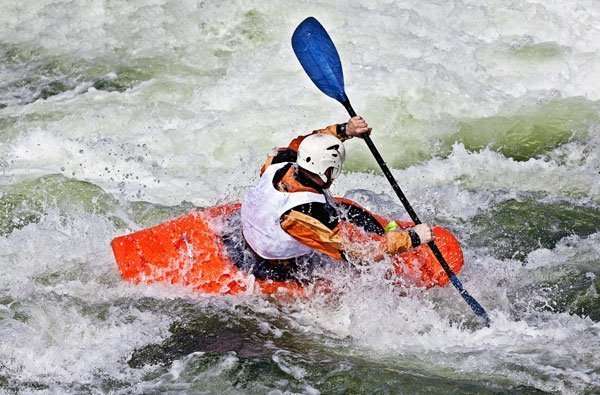 Last summer, I gave a young family a ride in my boat on the lake. One by one, each child sat on my lap and took a turn at steering the boat. I would point to a visible landmark on the far shore and encourage the child to steer toward it. If the boat drifted off course (which happens frequently), I would help them notice and steer back toward the landmark. At first, the child would over-correct wildy, turning the wheel multiple times, working very hard and throwing the boat way off course, making course correction almost impossible. But soon, with guidance they would learn that a tiny correction on the wheel would be enough to shift the trajectory of the boat toward the desired heading. The key was waiting for the feedback of the action. Move the wheel…wait for it…see the effect. The lag of time in feedback loop was the biggest challenge for the child to overcome.

I had the same problem the first time I learned to fly an airplane. Having been used to driving a car, I had no idea how subtle the correction mid-air would need to be. Throwing a plane into wild course deviations is a common rookie mistake.

Rapid feedback and observing the effects of small corrections are essential to dynamic steering. Think of dynamically steering your business or team as the sweet spot for you as a leader. Have your hands firmly on the “wheel” of how you envision your goal and communicate. Make small corrections as needed and watch carefully. The lag-time between course correction and observable changes can be tricky, especially if patience is not your strongest virtue.

Take a sense and respond approach to goal achievement instead of the typical predict and control approach. Rapid feedback and small corrections will strengthen your capacity to be adaptive and resilient. Natural conditions in your organization or in the marketplace are always working to throw things off course. Regardless of the disruptive circumstances that might emerge, dynamic steering is the best first approach. Keep your eyes on the horizon line and the vision of your desired outcome in front of you. Communicate in such a way to encourage taking small next steps and gaining feedback. Do more of what works. When the adjustments are not getting you where you want to go, shift tactics to do things differently.

Ronald Heifetz, in his book Leadership Without Easy Answers, (1998) and his later book The Practice of Adaptive Leadership (R Heifetz, A Grashow, M Linsky – Boston (MA): Harvard Business School Publishing, 2009) will offer a deeper dive into many essential concepts.

Al Siebert, also goes deeper in his book The Resiliency Advantage, (2005). The home study course he co-authored with me Resilience: The Power to Bounce Back available on the Scheele Learning Product page.